Kesselrun Extends Strike Length on McKellar with Intercept of 6.4 g/t Au over 5.9 metres

THUNDER BAY, ON, November 12, 2020 – Kesselrun Resources Ltd. (TSXV:KES) (“Kesselrun” or the “Company”) is pleased to provide the following update on its 100% owned Huronian Gold Project. 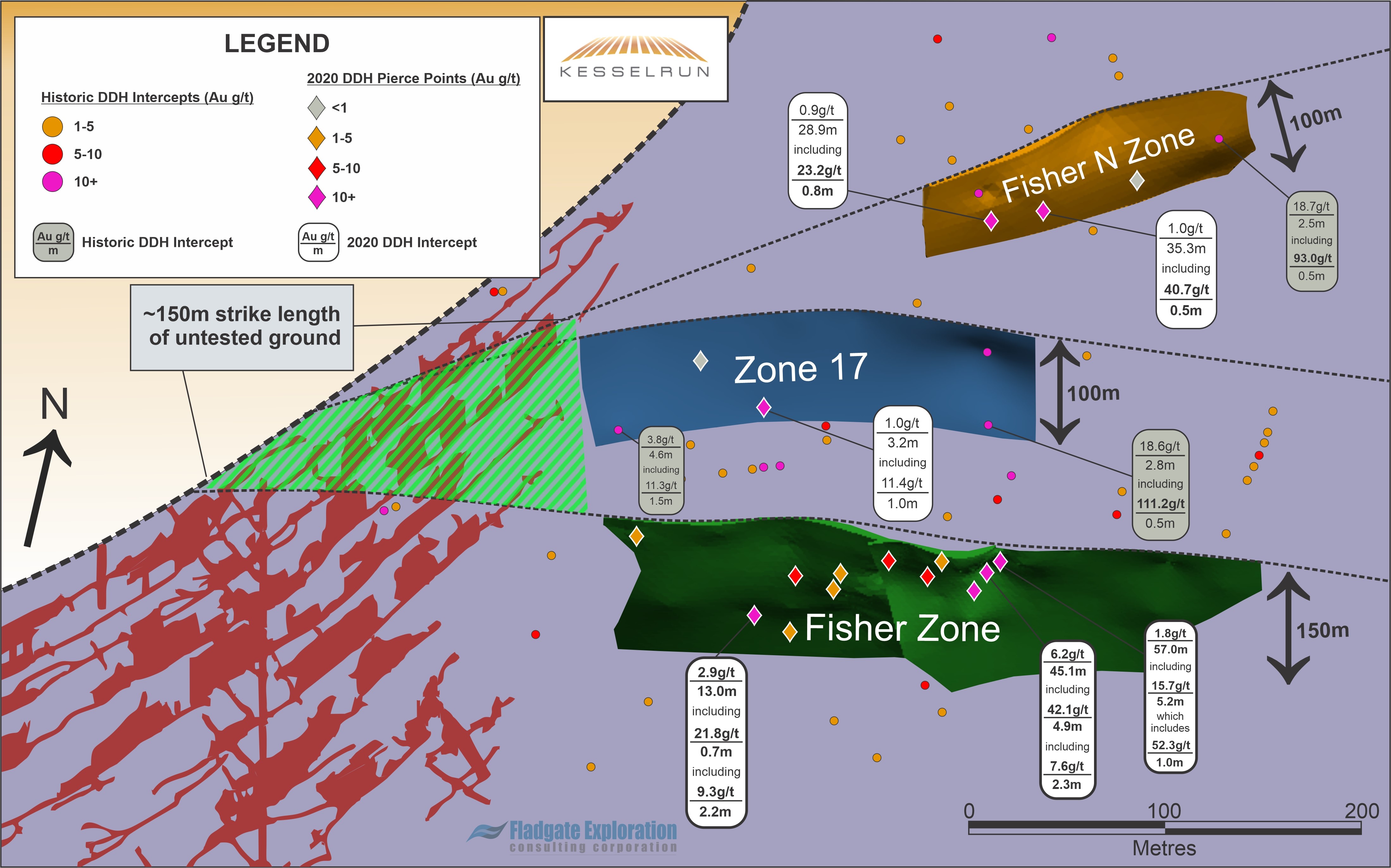 Michael Thompson, P.Geo., President and CEO of the Company, commented, “Our drilling on the Fisher North Zone has demonstrated the continuity both at depth and along strike. Historic drilling focused on assaying the high-grade veins while neglecting the surrounding zone of alteration and mineralization.  These results demonstrate that the gold mineralization is broadly pervasive throughout the Fisher North Shear Zone.  As well, the discovery of a previously unrecognized zone between Fisher and Fisher North highlights the potential to outline further zones of gold mineralization in the area greatly enhancing the possibility of outlining economically compliant ounces”.

The 2020 Huronian drill program targeted four zones; Fisher, Fisher North, McKellar and Huronian. The four zones are in proximity along an approximate 1500 m strike length in the area of the historic Huronian Mine. The zones include multiple generations of quartz veins that carry high grade gold values in association with altered, sheared and variably mineralized mafic volcanics, feldspar-quartz porphyries and iron formation.

Previous operators have focused on the Fisher, Fisher North and McKellar Zones where drilling has been concentrated at near surface depths of 75 metres or less, while the Huronian Zone has been mostly unexplored since the closure of the mine in 1936. As a result, Kesselrun believes there to be significant upside potential on all zones. 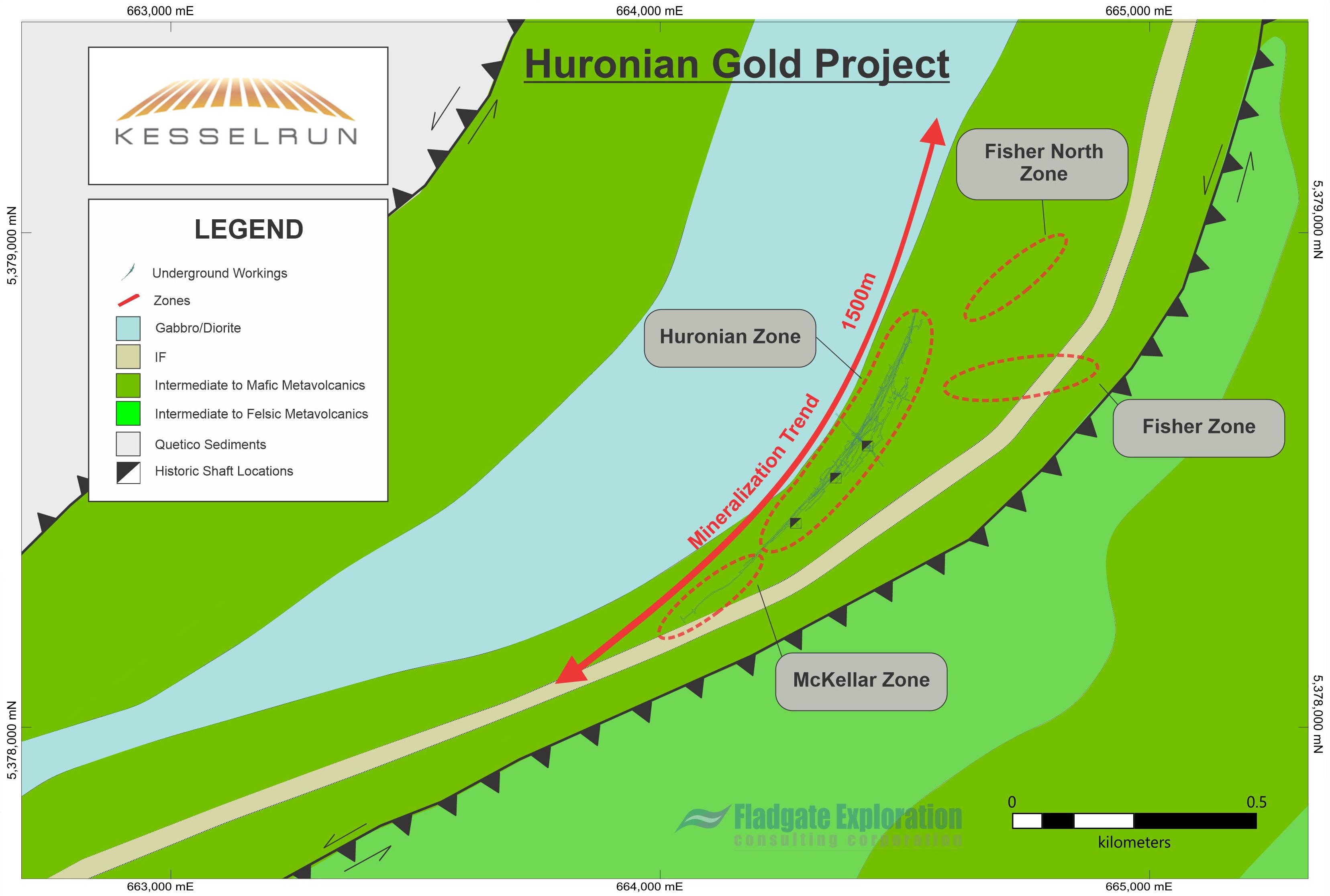 Kesselrun continues to assess its financing requirements in consideration of current market conditions.  The Company maintains, as it always has, a healthy cash/cash equivalent balance and remains committed to advancing the Huronian project.

About the Huronian Gold Project

The 100% owned Huronian Gold Project hosts the past producing Huronian Mine, Northwestern Ontario’s first gold mine with an historic resource estimate of 44,592 oz Au @ 15.3 g/t Au in the indicated category and 501,377 oz Au @ 14.4 g/t Au in the inferred category. The resource estimate presented for the Huronian Project is historic in nature. Kesselrun Resources’ qualified person has not completed sufficient work to confirm the results of the historical resource. Kesselrun Resources is not treating this as a current mineral resource but is considering it relevant as a guide to future exploration and is included for reference purposes only. The historic resource was estimated by Minescape Exploration Inc. in 1998. Further drilling will be required by Kesselrun Resources to verify the historic estimate as current mineral resources.

As well, the Huronian Gold Project hosts the same lithological package of rocks, as interpreted from both Government of Ontario and Kesselrun Resources mapping, compilation and modelling, on strike from Wesdome Gold’s (TSX:WDO) adjacent Moss Lake Gold Deposit with a resource estimate of 1,377,300 oz Au @ 1.1 g/t Au in the indicated category and 1,751,600 oz Au @ 1.1 g/t Au in the inferred category as outlined in their 2013 PEA2. Mineralization hosted on adjacent and/or nearby properties is not necessarily indicative of mineralization hosted on Kesselrun Resources’ property.

Michael Thompson, P.Geo., President and CEO of Kesselrun, is the Qualified Person responsible for the project as defined by National Instrument 43-101 and has approved the technical information in this news release.

Kesselrun has implemented a quality control program to comply with industry best practices for sampling, chain of custody and analyses. Certified gold reference standards, blanks and duplicates are inserted at the core processing site as part of the QA/QC program in addition to the control samples inserted by the lab. Samples are prepared and analyzed by Activation Laboratories in Thunder Bay. Samples are analyzed for gold using Fire Assay-AA techniques. Samples returning over 10 g/t gold are analyzed using Fire Assay-Gravimetric methods. Selected samples are also analyzed with a standard 1 kg metallic screen fire assay. All results reported herein have passed QA/QC protocols.

Forward Looking Statements – Certain information set forth in this news release may contain forward-looking statements that involve substantial known and unknown risks and uncertainties. These forward-looking statements are subject to numerous risks and uncertainties, certain of which are beyond the control of Kesselrun, including, but not limited to the impact of general economic conditions, industry conditions, volatility of commodity prices, dependence upon regulatory approvals, the execution of definitive documentation, the availability of financing and exploration risk. Readers are cautioned that the assumptions used in the preparation of such information, although considered reasonable at the time of preparation, may prove to be imprecise and, as such, undue reliance should not be placed on forward-looking statement