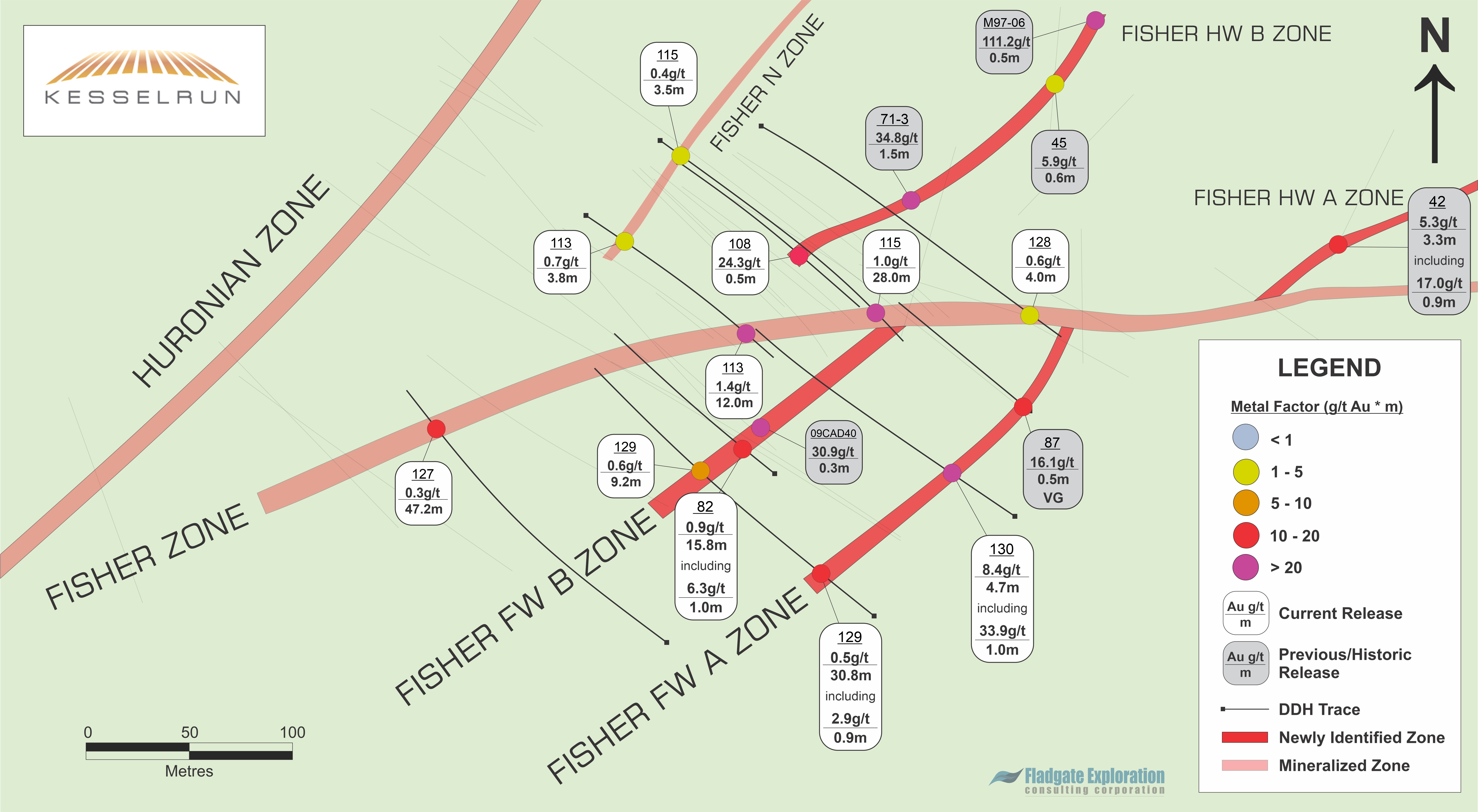 Ongoing modelling incorporating drill results from both Kesselrun and previous operators has interpreted multiple new zones in both the hangingwall and footwall to the Fisher Zone. These zones vary in thickness from 0.5-10m wide and are currently outlined up to 200m along strike. The recognition of these new zones points to the tremendous potential that remains in the area in and around the historic Huronian mine. Numerous historic drill intercepts and surface expressions of gold mineralization have yet to be incorporated into modelled zones.

Michael Thompson, P.Geo., President and CEO of the Company, commented, “As expected, multiple high-grade zones have been defined. As we progress with our drilling to greater depths on the Fisher Zone we recognized the step backs in drill locations would present the opportunity to test both the footwall and hanging wall sides of Fisher. Previous operators on the property intersected scattered high-grade intercepts on both sides of Fisher which presented an opportunity to integrate these intercepts into zones through targeted drilling and modeling.”

Mr. Thompson remarked further, “Further drilling in the area, we believe, will not only further expand on these zones, but also yield future discoveries of new zones. The close proximity of all the zones in the Huronian Mine area will have positive implications on the goal of advancing this project.”

The 2022 Huronian exploration program will consist of drilling as well as geophysics over selected target areas. Drilling will be targeting the Fisher, Fisher North, McKellar and Huronian zones, all in close proximity along an approximate 1500 m strike length in the area of the historic Huronian Mine. As well, the geology on strike to the southwest of Goldshore Resources’ Moss Lake deposit will be targeted. A 2nd drill rig is currently in the process of being procured for the increased drilling activity anticipated in 2022. 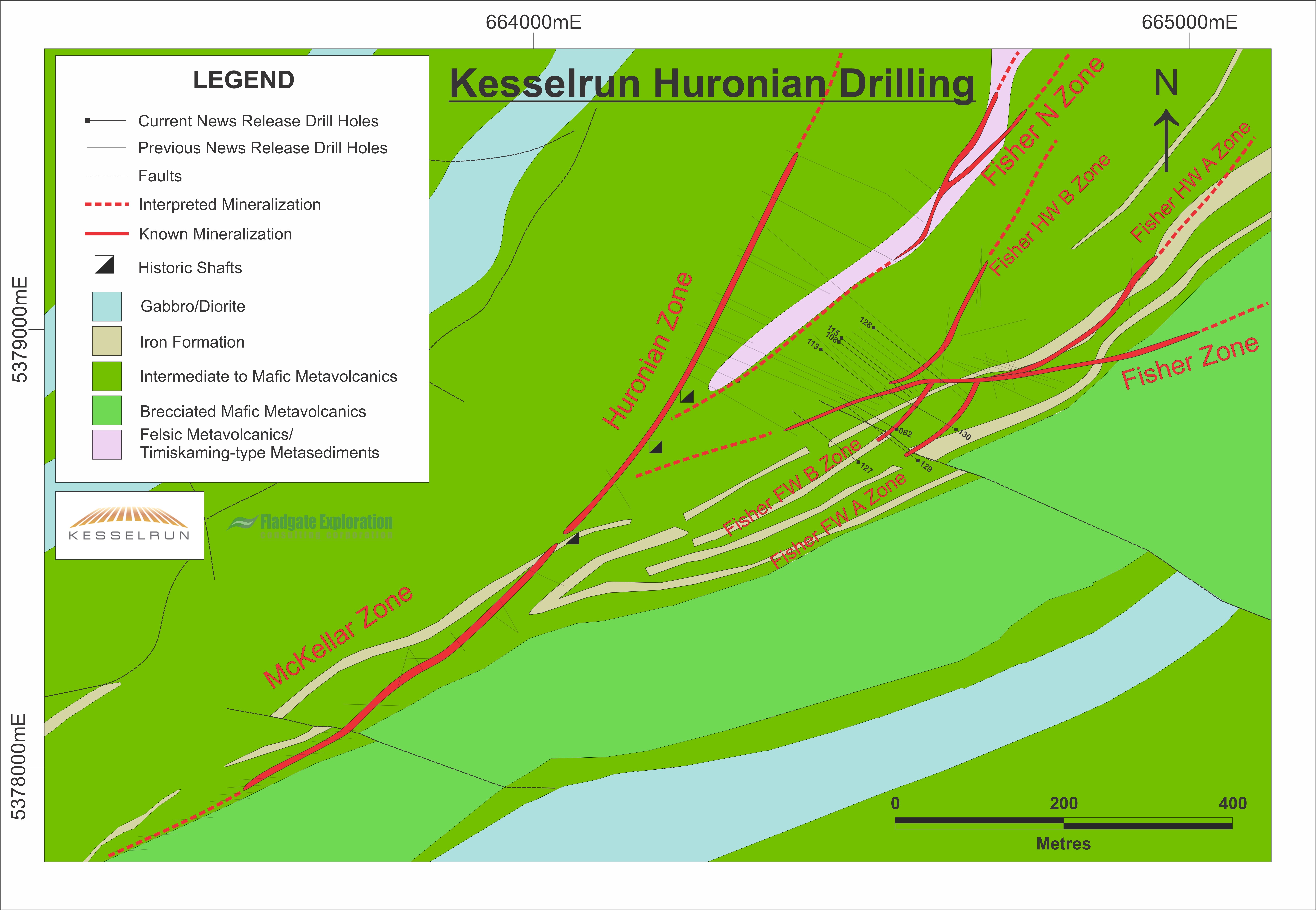 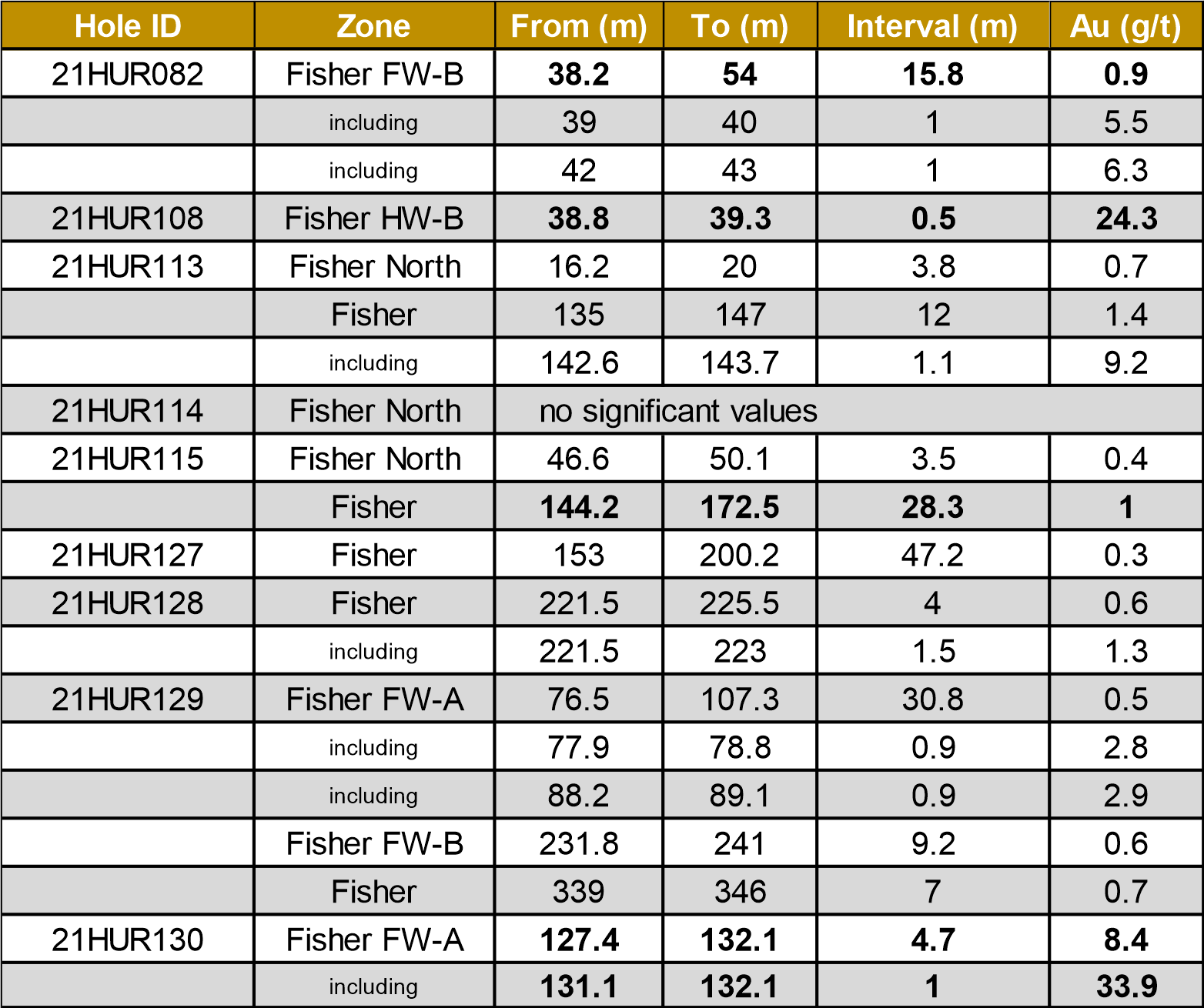 About the Huronian Gold Project

Michael Thompson, P.Geo., President and CEO of Kesselrun, is the Qualified Person responsible for the project as defined by National Instrument 43-101 and has approved the technical information in this news release.

Kesselrun has implemented a quality control program to comply with industry best practices for sampling, chain of custody and analyses. Certified gold reference standards, blanks and duplicates are inserted at the core processing site as part of the QA/QC program in addition to the control samples inserted by the lab. Samples are prepared and analyzed by Activation Laboratories in Thunder Bay. Samples are analyzed for gold using Fire Assay-AA techniques. Samples returning over 10 g/t gold are analyzed using Fire Assay-Gravimetric methods. Selected samples are also analyzed with a standard 1 kg metallic screen fire assay. All results reported herein have passed QA/QC protocols.

The following is clarification to the April 14, 2021 news release regarding investor relations contract for Mr. Larry Heuchert.

On April 12, 2021, the Company entered into a consulting agreement with Mr. Heuchert to provide investor relations services for the Company. The original agreement was for a four-month period with either party having the right to terminate the agreement with 30-day notice. Pursuant to the contract, Mr. Heuchert was compensated USD$2,500 per month.

On July 14, 2021, the Company granted to Mr. Heuchert an option to acquire up to 75,000 common shares of the Company at $0.40 per common share (the “Option”). The Option was granted as part of the Company’s stock option plan and vested at the time of grant. As of the date of this news release Mr. Heuchert has not acquired any shares available to him pursuant to the Option.

On July 31, 2021, the Company entered into a revised consulting agreement with Mr. Heuchert which included the above-mentioned Option and extended the term of engagement for another four-month period. All other terms of the agreement remained the same.

As of the date of this news release, Mr. Heuchert continues to be engaged by the Company on a month-to-month basis under the terms and conditions of his July 31, 2021 consulting agreement and is compensated at USD$2,500 per month.  Mr. Heuchert assists the Company in responding to investor inquiries as an independent contractor, is based in Las Vegas, Nevada and, in addition to the above Option, currently owns 83,991 common shares of the Company acquired in the open market.

Forward Looking Statements – Certain information set forth in this news release may contain forward-looking statements that involve substantial known and unknown risks and uncertainties. These forward-looking statements are subject to numerous risks and uncertainties, certain of which are beyond the control of Kesselrun, including, but not limited to the impact of general economic conditions, industry conditions, volatility of commodity prices, dependence upon regulatory approvals, the execution of definitive documentation, the availability of financing and exploration risk. Readers are cautioned that the assumptions used in the preparation of such information, although considered reasonable at the time of preparation, may prove to be imprecise and, as such, undue reliance should not be placed on forward-looking statements.